Jurgen Appelo is a lot of things – a serial entrepreneur, book author, keynote speaker, manager, trainer. He says he offers concrete games, tools, and management practices to help creative organizations survive and thrive in the 21st century. Coming from Rotterdam, The Netherlands, Appelo is the author of the book Management 3.0, which describes the role of the manager in agile organizations. As a public speaker, he often travels across Europe to conduct training sessions and workshops.

Unless the coronavirus containment efforts change the plans of the organizers from Launchee, Appelo will actually be coming to Sofia later this month, on the 18th of March. One of the talks that will happen during this visit will focus on agile transformation and why different practices are required in different stages of the business lifecycle. Trending Topics is a media partner of the event so we did a quick interview.

Trending Topics: At the beginning of your career, you worked as a software developer and then transitioned to a management role. What was your first big screwup as a manager and what did you learn from it?

Jurgen Appelo: Well, the first time I became a manager of 15 or 20 software developers, I tried to motivate people through their salaries. And, that didn’t work. I remember one time when one of the software developers had made a big mess of everything and we thought we need to send a signal that he needs to improve. So, at the next salary raise in our company, we did not raise his salary as high as that of his friends who also worked at the company and had great results. That was a terrible decision. It led to a lot of problems and demotivation. Back then, I thought it would motivate him to work on his skills but it had the opposite effect.

How would you do it now?

First of all, I must admit he had very little feedback on his work throughout the year, so I would work a lot more on that as well as recognition, 360-degree meetings, self-improvement and so on.

Where should a company start its agile transformation and what’s the process like?

I don’t think that such a universal process exists. If someone wants to be healthy, what does the process look like? It depends on the person – do they need yoga, do they need running or cycling or whatever. The same goes for organizations – you cannot just say: “You should all start here and that’s what the process looks like.”

Something I do find interesting and I will talk about it next week – I think it’s important to limit the scope of agile transformation to specific business units. Because different units are at different stages of their lifecycle – some are startups, others are scaleups, third have been around for a long time – and they all need different approaches. You don’t give the same health advice to someone who is 80 years old and to someone who is 6 years old – they are at different stages of their life.

We need more discussion about that. In what stage in their lifecycle are the different business units? Are they starting up, are they scaling up, are they profitable or are they already in decline? That leads to a lot of difference in what kind of agile transformation you will have.

Is there a recipe for an organizational structure that enables successful agile scaling? For example, can the Spotify tribes that some organizations try to copy be the answer for every scaling company?

No, because the organizational structure depends on the business model. Form should follow function. One business unit can have a SaaS model, other might have physical stores – do you want the same structure for both businesses? So, we need to figure out what we are selling and what’s the value we are offering and that should determine what the company looks like. Nowadays, even at Spotify, they don’t use the Spotify model.

In a Medium post, you say that the design thinking and lean startups model are broken. And, you have created another one – ‘The Innovation Vortex’. Why did we need another innovation methodology?

However, there is just one thing I don’t like – the pictures of the models. The design thinking pictures look linear, very waterfall. And the lean startup picture only says: ‘build-measure-learn.’ Where do those ideas come from that you build? You don’t just start building random things. You get ideas by looking at customer needs. 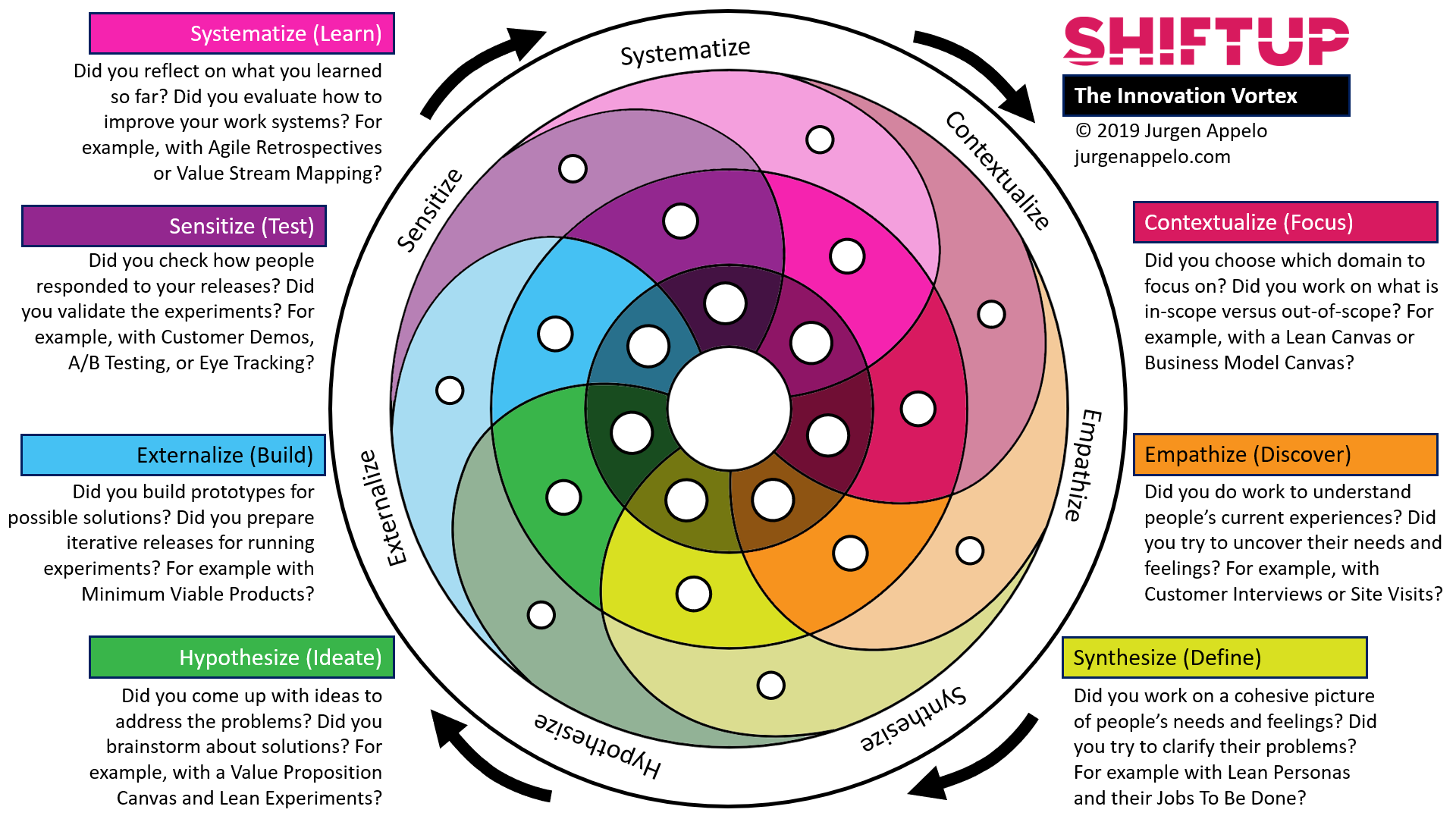 What are the top mistakes you have seen executives make when trying to transform their organization?

One thing is that agile transformation is often planned in a traditional manner – with deadlines and project plans. The whole point of being agile is to get rid of project plans and to be responsive to organizational and environmental changes.

The second is the top-down approach and that people are not being involved bottom-up. That leads to people being demotivated. Because they just hear that another organizational change has been rolled out. If they are not involved, if they cannot decide for themselves what’s the best way moving forward, what’s the best structure, method or model..if it all comes from above, it just doesn’t usually work.

Another mistake perhaps is targets. I have urged companies into agile and scrum, for example, and then they have targets like: “By this date, we want to have 100 self-organizing teams”. Then they said: “We had teams that were thrown together and called ‘self-organizing’ but nobody had any idea what the team was for.” But at least progress towards the target was made.

How can a manager find the balance between keeping employees intrinsically motivated and still making sure business goals are achieved? Intrinsic motivation is often shown as one of the biggest predictors of creative behavior. In your experience, do strategic autonomy programs like Google’s 20% time work and what are the alternatives?

I don’t think that’s something you need to balance as a manager. I think that we need to motivate our employees to reach the organization’s objectives. So, the intrinsic motivation for the team should come from the objectives the team agreed on. The problem is that usually many objectives are assigned to teams and the teams don’t buy into those targets and objectives because they did not choose them.

A methodology I find more relevant, again used by Google, is OKR or Objectives and Key Results. With OKR, it’s the people, teams, and departments, the ones who pick their objectives and nobody gives objective to the next lower level manager.

Then, I don’t need to balance my intrinsic motivation and my objective. They end up being the same thing because I have set my own objective.

You actually wrote a book called ‘Managing for happiness’. Why is that important?

Well, I think that it is important for managers to try and help their employees be happy. Because happy people are more productive. They are also more motivated. There are scientific studies confirming that. It makes sense economically and it also makes sense ethically. I want to work with people who feel good, who feel happy and enjoy working with me. So, let’s figure out what makes people happy and contribute to that.

Do cultural differences matter when it comes to innovation management? Without generalizing too much, Dutch people are known for being direct and frank while Bulgarians usually try to avoid confrontation with their managers. Is this something you’d somehow address during your workshop in Sofia later this month?

There are definitely cultural components to organizational change that are important. The Netherlands is known as a country where people are more direct and management layers are flat.

I don’t want to underplay geographical culture as it does have an impact. There is a reason why Nordic countries like The Netherlands and Sweden find it easier to implement agile thinking – it’s less hierarchical and more collaborative culture than in other parts of the world. But, in my opinion, industries and jobs still have a much bigger influence.

We just celebrated International Women’s Day. What’s your opinion on the topic of female leadership?

It’s definitely important to have in the team both people who think in a feminine way and people who think in a masculine way. Also, people from different cultural backgrounds, extroverts and introverts, rationally thinking people and emotionally thinking people. These are all aspects of cognitive diversity which has been proven to lead to more creative and innovative teams.

Of course, you can oversimplify everything and say that men do things in a masculine way and women do things in a feminine way. There is a high probability that this is true. But not all men are masculine and not all women are feminine. So, we should not simplify things too much.

+++Register for ‘How to Fix Your Failed Agile Transformation’, free to attend, March 18th at Launchee