Some areas and ecosystems on earth, such as tropical rainforests, peat areas, or moors, fulfill an important task: They store carbon from the air. Many of these areas have a high density of carbon, which researchers call “irretrievable”. This is carbon that could no longer be recovered once the carbon is released through the destruction of the areas. From the point of view of science, it is therefore important to protect these areas in the face of the global climate crisis. In a recent study by Conservation International, a non-profit organization based in Washington DC, which was published in the journal Nature, researchers use maps of the world to show where the ecosystems that contain this irretrievable carbon are located.

83 percent of the areas are overgrown with trees

Around 3.3 percent of the global land area alone is home to half of the earth’s irretrievable carbon. The ecosystems with a high density of this type of carbon include, above all, mangroves, tropical forests, and peat areas, as well as old forests in the temperate latitudes. These are located in areas in the northwest of North America, in the west of South America, but also in the Congo Basin and on the island of Borneo. According to the study, a total of 83 percent of the areas are overgrown with trees, which is hardly surprising: Trees are perhaps the best-known helpers that take CO2 from the atmosphere through photosynthesis and then store it in the wood and soil. 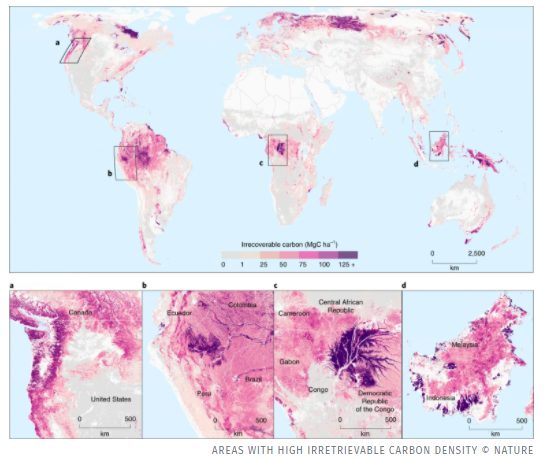 Large amounts have already been lost

In some areas, such large carbon sinks have recently been irretrievably lost. The researchers estimate that an estimated four gigatons of carbon were lost between 2011 and 2019 that can no longer be recovered through afforestation or other measures. This can be attributed to the loss of tree stocks, for example, due to the deforestation of forests to obtain beef, soy, palm oil, and wood fibers. In addition, a shift in agriculture to the tropics is contributing to forestry and whale fires in the temperate and boreal zones. In a “business-as-ususal” scenario, ie countries continue to emit emissions as before, it is possible, according to the study, that in every coming decade there will be sinks of 4, 5 gigatons could be lost – and that alone through deforestation. This would mean that by 2050 at least 10 percent of the world’s carbon sinks could be irretrievably lost.

What can the international community do about this development? The researchers of the study advocate strategies to prevent impending loss. These include payments to reduce deforestation and buy back government permits for deforestation. However, they also emphasize proactive strategies to secure areas over the long term, such as promoting indigenous peoples’ rights, expanding and adequately funding protected areas, and managing carbon-rich ecosystems with a view to climate resilience. According to the study, designating protected areas can also secure the rich biodiversity, which is usually very high in the affected areas, and prevent the species from becoming extinct. Currently, only 23 percent of irretrievable carbon is in protected areas.

Maps as a guide

According to the researchers, protective measures can be better prioritized with the world maps and evaluations of the non-recoverable carbon sinks. In addition, they give countries an orientation for such measures. At the end of the study, the study authors appeal that humans in the Anthropocene have the unique ability to control carbon storage and flows on a global level. In addition, the decisions that are made today about the non-recoverable carbon sinks in ecosystems have an impact on the atmosphere of future generations, according to the researchers.

“The consequences of releasing this stored carbon would stretch for generations and undermine our chance to stabilize the earth’s climate at a level tolerable for nature and humankind,” said Johan Rockström, Senior Scientist at Conservation International and Co-Director of the Institute for Climate Impact Research in Potsdam, in a press release on the study. “We must act now to preserve the planet’s ability to serve as a carbon sink, and that includes prioritizing these unique ecosystems.”