Driving a car is convenient, maintaining and servicing a car might steal a lot of energy, emotions, and time. Especially having in mind the low level of digital transformation and digital services in this field. To spare valuable time and efforts of car owners was the initial idea with which Emil Stavrev and Todor Gigilev started Avtoikonom (Autobutler) two years ago.

“The automotive industry as we know it cares less about the customer, once a vehicle is sold. The focus is on the vehicles instead of the convenience of the owner. And this is what we wanted to change,” says Stavrev, who is also a program manager for EMEA at HP.  “We wanted to create a platform where we unite the whole ecosystem of dealers, brokers, car services, etc., and put them on the same platform with clients,” explains Gigilev. And so they did.

Digital services that make sense for the drivers

After several discussions about what’s their role as a tech company – to offer services to users or to offer a technology product to businesses,  Gigilev and Stavrev decided to launch a 2bc mobile app. The initial idea – the car owner can access a variety of services provided by different companies and to purchase them, then an auto butler picks up the car and returns it after service. Within the first year, they started adding different components, so that Avtoikonom turned into a whole platform – with an app for car owners, an app for butlers, and a CRM system. The platform of Avtoikonom democratizes in a way as the maintenance and services on the market – anyone can offer their services.

“This creates competition and can naturally increase the quality of the services on the market. There’s also a two-way rating system,” explains Stavrev. In the next phase, Avtoikonom aims to offer also digital payments, streaming service, which would allow drivers to directly call their insurance companies in case of an accident.

Among the clients of Avtoikonom are currently private users, but also small companies with a fleet of up to five vehicles. So far the app has been downloaded 6k times and 3.5k services have been purchased through the platform. Many of the users use the platform to store and manage all the documentation of their vehicle digitally, which is a free service. Avtoikonom charges a fee for pickups (around €15), everything else is paid separately to the respective servicing company. They also offer a subscription model. “We are still the first in the world that offer such a platform the unifies different services and businesses,” states Stavrev. Different businesses can also use the platform to manage and communicate with their customer base. According to him, AvtoIkonom has developed the whole process, each line of code, the business model, etc. from a scratch. The b2c service is currently available only in Sofia, but Stavrev and Gigilev are planning to expand it to other cities through a franchise model.

From a b2c service to b2b CaaS platform

Serving the end customer, and employing butlers to do so, however, is not quite a scalable model. This service, in 2018 generated around €70K of revenues, shows the commercial register. And Avtoikonom is a technology company that should be easily capable of scaling the product and bring it on the international market, where a concept called car-as-a-service or car on subscription is an emerging trend.

So after these first steps – to test the market and understand the customers better, now Avtoiknom will start selling the platform (the application for butlers and the whole CRM system behind it) and the model to corporate clients. “We estimate that a company would need to invest at least €1m and two years to develop a similar platform in-house,” says Stavrev. That’s approximately the investment the founders (time and work included) made, and they haven’t raised any external funding. Yet.

Their first collaboration is with the leasing company Eurolease, which will offer a car-as-a-service model under the brand Simpl in September. In this scenario, Avtoikonom charges the client a subscription fee based on the number of Simpl’s users. “We are currently in negotiations with one of the largest carmakers in Europe, who’d like their official dealers to use the platform to improve the customer care,” says Stavrev.

According to Stavrev, and his co-founder Todor Gigilev, the car-as-a-service model is where the whole industry will shift in the next several years. They estimate the market for this type of car service at $700b. A recent report by Technavio shows that the market size will grow by $143b during 2019-2023. Research suggests that Europe is expected to be a large market for the vehicle as a service model since the majority of the vehicle as service vendors such as Orange Business Services, Nokia Corporation, and Volvo Cars are based in Europe.

And this is exactly what Avtoikonom, which has meanwhile won the price of StartUp Germany award, is waiting for. The startup already has developed and tested the platform that maintains the whole process behind such services and it is just a matter of time for the market to mature enough.  Gigilev and Stavrev are also planning to test the regional markets through the network of their new client Eurolease Group in the near future. 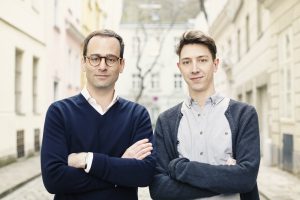